Home > Statement on Inclusion and Discrimination > Board of Directors

AnJanette Brush, Chair: A former educator, non-profit arts administrator, and corporate communications director, AnJanette Brush is the co-founder and co-owner of El Salto Partners, an Arroyo Seco, NM-based consulting firm delivering communications and business development strategies. Her work helps organizations reach new and existing audiences more effectively, helping to inspire action and engagement. She loves the Taos community, the New Mexico landscape, and being outdoors as much as possible on the many trails that RMYC makes possible for all to enjoy.

Cameron Martinez, Vice-Chair: Mr. Martinez holds a BS in Forest Management Science and a MF in Silviculture from Colorado State University, he has completed the highly regarded Senior Executive Service candidacy program with the Department of Interior and was a Senior Fellow at the JFK School of Government in Public Policy and Administration at Harvard University. He has worked 30 years for the Department of Interior in various executive positions and 10 years for the Pojoaque Pueblo also in executive positions. Mr Martinez has had the opportunity to work for then Representative Tom Udall as a staff assistant and continues to maintain open lines of communication with this office. In addition, Mr. Martinez has worked with a wide variety of community organizations on various levels of issues and projects. This experience and skill will allow him to assist the RMYC in fulfilling its goals and for Mr. Martinez to fit into its board members responsibilities of the “duty of care,” the “duty of loyalty,” and the “duty of obedience.”

Pascualito Maestas, Treasurer: Pascual graduated from Taos High School in 2005. During his senior year, he served a term of service with Rocky Mountain Youth Corps’ After School Tutoring program where he tutored several local elementary youth. Following graduation and a summer term of service on a field crew in Bandelier, he enlisted in the United States Navy. After an Honorable Discharge, Pascual earned dual Bachelor’s degrees in Economics and International Studies from the University of South Florida in 2011.

He returned to Taos and served a third term of service with Rocky Mountain Youth Corps’ Community Health Crew working with local organizations to reduce substance abuse. He was then employed as a Youth Conservation Corps (YCC) supervisor, a coordinator with RMYC’s Energy Efficiency Program, YCC coordinator, and finally Learning Lab teacher where he earned a secondary teaching license with endorsements in mathematics, language arts, science, and social studies.

Pascual was elected to the Board of RMYC in the fall of 2016, and is currently in his second year of a four year term in the Town of Taos Council.

Doug Thiesen, Member: Born in 1952 and raised on a farm in northwest Iowa, Doug attended the University of Iowa, where he obtained both a Bachelor of Science degree and a Juris Doctorate. After law school, he joined the Air Force and practiced general civil law, served as a criminal prosecutor and was an Area Defense Counsel. Following active duty, he was hired as an AF civilian attorney at Norton AFB in southern California, where he practiced labor law, environmental law and contract law. In 1989, he moved to Albuquerque and began working as a federal civilian attorney on Kirtland AFB until he retired in 2013. Since retirement, he has devoted a good deal of his time to family and personal business matters. He has volunteered with the NM Technology Research Collaborative, the NM Volunteers for the Outdoors, Friends of the Sandia Mountains and Los Amigos de Valles Caldera, and the Popejoy Ambassadors Program and a church sponsored food distribution program. He is married to an AF officer and has two adult daughters.

Dede Feldman, Member: The first woman elected as a New Mexico senator from Albuquerque’s near North Valley, and now the author of a book about her experiences, Dede Feldman has been a pioneer for women in government. She has a long history of promoting campaign finance reform, improved health insurance in New Mexico, and election reform. Dede built her foundation for change with a varied career as a journalist, high school and university teacher, and the owner of a small public relations business. As the state senator for District 13 from 1997-2012, Feldman had a big impact on the lives of women, children, and people struggling to make ends meet. Dede has lived in the North Valley of Albuquerque since 1976 in a solar adobe home she and her husband built as an experiment in passive solar design.

Bianca Gonzales: Bianca is a Middlebury College alum, Daniels’ Fund Scholar, entrepreneur, and current Land Planner with the State Land Office. With a background in dendrochronology and fire ecology, Bianca has worked as a research assistant with Harvard, Bandelier National Monument and the Smithsonian. In her current role with the State, she is working on landscape wide problem solving to ensure we have a holistic long-term planning approach that considers the environment. Originally from Taos, New Mexico, Bianca grew up playing in the Sangre de Cristo Mountains and is proud to be a former RMYC crew member! She attributes her core values to not only her parents, but her multiple years in service with RMYC as a teenager.

Marc Space: Marc retired as an educator in 2018 after 39 years in the profession, the last 16 years of which he served as a superintendent of schools, including 5 years here in Taos (2002-2007). Marc received his Doctor of Education in Educational Leadership from the University of New Mexico in 2000. Here in Taos, Marc created the Taos Cyber Magnet School and established the Taos Schools Foundation, which currently operates under the umbrella of the Taos Community Foundation. Marc is a Paul Harris Fellow, an honor from Rotary International. He has served as the president of the Taos Milagro Rotary Club (2005-2006) and currently serves as the Vice President and the Director of Education on the board of the Enchanted Circle chapter of Trout Unlimited. In the latter capacity Marc has brought Trout in the Classroom to many area schools, including Taos Middle School and Taos Day School. 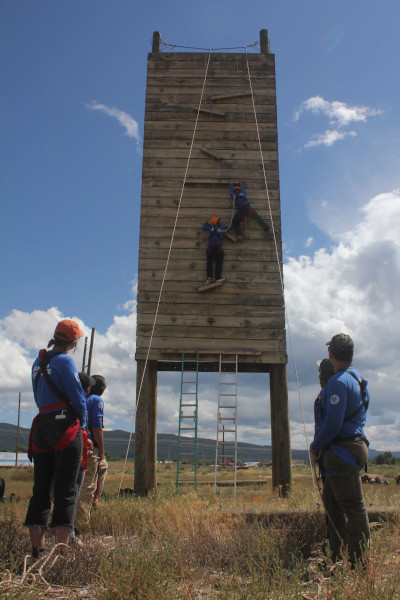